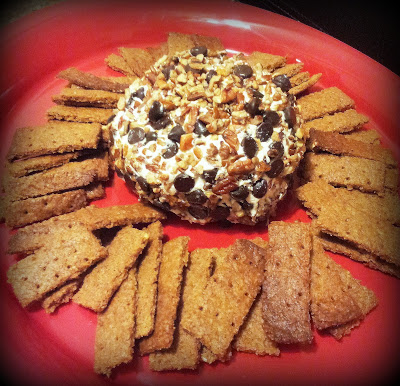 I was out shopping today at Giant Eagle and took notice of a few samples of prepared holiday food items near the bakery and specialty cheese department. Among the items in the cheese department were a variety of store-made cheese balls. Let me start by saying that I’ve never had a cheese ball. It’s not that I think there is anything wrong with them, I just have never thought they looked very appetizing. My eyes, however, were immediately drawn to a chocolate chip cheese ball.

“Chocolate? Cheese? What the huh?” I thought. I made a mental note to check the status of this curious cheese ball, so when I got home, I put the power of Google to use. Sure enough– a chocolate chip cheese ball turned out to sound absolutely delightful; almost like a thick, flourless cookie dough. A mixture of cream cheese, butter, powdered and brown sugars and vanilla extract sounded really, really good. You know what else it sounded like? An easily-made sugar free recipe.

Of course, the cheese ball needed something to put it on. At the grocery store, the samples were served with graham cracker pieces. I decided a graham cracker-like item would be ideal and started off.

The cheese ball turned out amazingly. It’s sweet but not too sweet, creamy and crunchy and makes a great edible centerpiece. Basically, it’s ideal for your next holiday party.

The graham crackers are made of almond, pecan and flax along with sweeteners, egg white and a little melted coconut oil. While they dry out (this is a good thing) as they cool, they’re not crispy or crunchy like flour-based graham crackers. They’re soft but slightly crisp and they go just perfectly with the cheese ball.

The crackers do have a very, very tiny amount of organic unsulfured molasses in them. This ingredient is not required as it does add a very, very trivial amount of sugar (one gram for the entire recipe). If you’d rather leave it out, you probably can. 🙂

EDIT TO ADD: Because the crackers were not quite as crisp as a “real” cracker, I decided to leave the crackers on a paper plate overnight covered by a paper towel. These were nice and crispy this morning! I recommend making the crackers a night ahead of time and leaving them out with a paper towel to get rid of excess liquid and you’ll wind up with a nice, crispy cracker come morning! Yum! 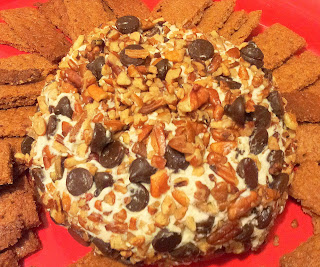 Graham Crackers: Ingredients
1 cup almond flour
1/2 cup pecan flour
1/2 cup golden flax seed meal
1/3 cup Swerve granulated sweetener (or other granulated sweetener)
2 T melted coconut oil
2 egg whites
1 1/2 tsp. ground cinnamon
Dash of nutmeg
Dash of salt
3/4 tsp. baking powder
1 tsp. unsulfured molasses (optional)
1 1/2 tsp. pure vanilla extract
1/8 tsp. xanthan gum
Cheese Ball: Ingredients
8 oz. softened cream cheese or neufchâtel cheese
6 T butter, softened
1/4 cup light granulated sweetener (I used Swerve granulated)
2 T brown sugar substitute (I used Sugar Twin Brown)
2 T Swerve Confectioners (or powdered erythritol)
1 1/2 tsp. pure vanilla extract
1 tsp. water
1/8 tsp. ground cinnamon
1 cup sugar free chocolate chips (I used Hershey’s), split into two half-cups
1/2 cup crushed pecans
Directions, Crackers:
1. Preheat oven to 275 degrees.
2. In large mixing bowl, combine all ingredients on low until a thick, sticky, uniform dough forms.
3. Place the dough onto a very large sheet of parchment and then top it with the same size piece of plastic wrap. Be sure to leave lots of room on the edges as the dough will get bigger as it is rolled.
4. Use a rolling pin to roll the dough, while in between the parchment or plastic, until it is 1/8 – 1/4 inch thick. Cut off any rough edges so that all edges are straight.
5. Use a sharp knife to cut the crackers into your desired shape. I made mine about 1/2 inch wide and two inches long since they’ll be used for dipping. Then run over the crackers with a fork to make the little holes that you see in a graham cracker (optional, but makes it look authentic).
6. Remove the plastic wrap and transfer the parchment paper with dough on it to a large baking sheet. Cut off any excess paper from sticking off the edges.
7. Bake at 275 degrees for approximately 30 minutes or until crackers just begin to brown at the edges.
8. Allow crackers to cool for up to an hour. Do not attempt to remove the crackers while hot; crackers will firm up as they cool and will be very fragile while hot.
9. Break the crackers apart once cooled and serve with the cheese ball.
Directions, Cheese Ball:
1. In large mixing bowl, cream together cream cheese and butter. Scrape down the sides of the bowl.
2. In a small cup, combine granulated sweetener and brown sugar substitute along with the teaspoon of water and vanilla extract and stir with a spoon. The granules will quickly dissolve into a thick syrup.
Place the syrup into the mixing bowl with the cheese mixture and add in the powdered sweetener as well.
3. Beat the mixture on high, scraping sides as necessary, until mixture is smooth and creamy throughout.
4. Using a spoon or scraper, mix in half of the chocolate chips by hand until evenly distributed.
5. Place the cheese mixture onto a large sheet of plastic wrap and tightly secure it into a ball-ish shape. Place on a flat surface in the freezer for about 45 minutes or in the refrigerator for about 2 hours.
6. Once the ball is hardened, place it into a bowl with the other half cup of chocolate chips and crushed pecans. Roll it around until the whole ball is coated evenly with chocolate and pecans.
7. Wrap the ball back into the plastic wrap and for it into as perfect a ball as you can. Refrigerate for another 20 minutes, or until just ready to serve. Serve with wheat free crackers.
Serves about 12 people.
Nutrition Facts (CHEESE BALL, made with cream cheese) 1/12 of recipe:   145 Calories, 1 net carb, 2g protein, 13g fat
Nutrition Facts: (GRAHAM CRACKERS) 1/12 of recipe: 95 calories, 1.5 net carb, 3 g protein,
9 g fat