You know how when you grow up, you just assume that everyone knows the same things that you do?  You know– like how you call Pepsi “pop” or “soda.” Then, as you wise up, you start to realize that not everyone identifies things the way you do. In my house when I was little (beware– this is a really weird story), when my little brother would walk around shirtless, he would refer to his– um– little boy “boobs” as “neeners.” My mom called them the same. I seriously grew up thinking that this was a normal term that everyone used. I thought girls had boobs and boys had “neeners.” When I was 13 or 14, I mentioned the word to a friend and she said “What? what the heck are neeners?” It was an odd moment when it hit me that apparently this was a made up name for an otherwise named body part. I felt pretty stupid. Also, this might just be the weirdest entry on this blog so far.

Anyway, growing up, my grandfather’s favorite cake– one that we always seemed to get him for his birthday– was cassata cake. In Cleveland, that means buttery cake, egg custard, sliced strawberries and real whipped cream. It was simple, it was reminiscent of summer and it’s extremely nostalgic for me.

About two years ago, as I looked up a recipe for the sweet stuff, I noticed something odd: many of the recipes were for a cake made with dried fruit and rum. I dug a little deeper and found out that our version of Cassata cake– the “Cleveland” version– was actually born right here in Cleveland, Ohio in our famous Little Italy neighborhood, where you can still buy it by the slice today from Corbo’s and Presti’s Bakeries. That’s right– if you’re here on the North Coast, you’ll probably identify cassata as a strawberry-cake combo. In other parts of the country, you may know it as something (scarily) closer to a holiday fruit cake.

Anyway, I was inspired to create a true Cleveland cassata cake– only healthy. This recipe is grain free, sugar free and absolutely delicious. It’s best when you put it together the night before and let it sit in the refrigerator overnight to let the flavors meld. I didn’t do this in the picture, which is why the custard is overflowing. Looks good anyway, though!  It’s not the easiest recipe, but I swear– it’s completely and totally worth it. 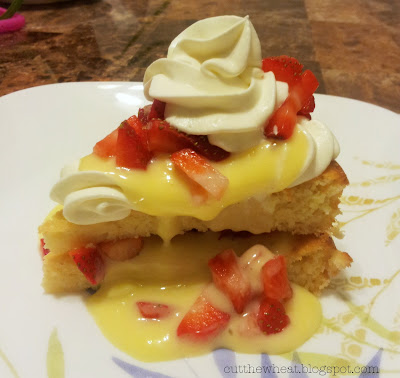