I’ve been craving cheesecake for days, but I wasn’t in the mood to bake one because this has been an excessively busy week. Instead I thought I’d take a few minutes and see what I could whip up. The result was this incredibly creamy cheesecake mousse with an easy peasy strawberry topping made with sugar free strawberry preserves. The great part about this recipe? Aside from the taste, this makes just two little servings, so you don’t have to be tempted with an entire cheesecake in the fridge for a week. 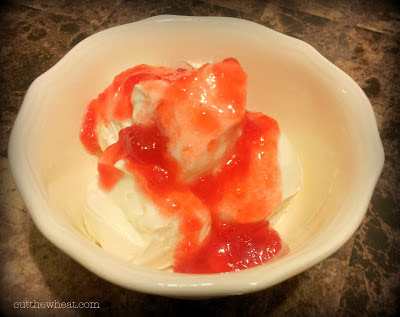 Do you have to use the strawberry topping? Nope. I think it really makes the dessert, but not everyone likes strawberries. You could potentially use any sugar free preserves you want, or some sugar free chocolate syrup. Or, if you’re really in the mood for a classic, no topping at all.

Also, I used neufchatel cheese in this recipe. For those of you that aren’t familiar with it, it looks exactly like cream cheese and is sometimes labeled as “1/3 less fat than cream cheese.” I didn’t use it because I’m scared of fat, but rather to keep the calories a bit lower. Cream cheese has 1g carbs per serving while neufchatel has 2, so it’s not really a huge jump in carbs. It’s also a whole food, as it’s not a “low fat” version of cream cheese, but rather a different type of cheese that tastes almost identical to cream cheese. It’s higher in protein, too. Think of it as traditional yogurt vs. Greek. That said, if you want to use regular cream cheese, go right on ahead. 🙂

I also want to add that while the recipe calls for you to refrigerate the cheesecake mousse for an hour prior to eating, this isn’t required if you’re impatient (and who could blame you?). I think it tastes better cold, but it’s also great right after you make it. 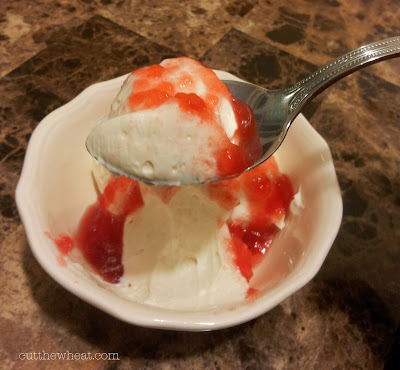 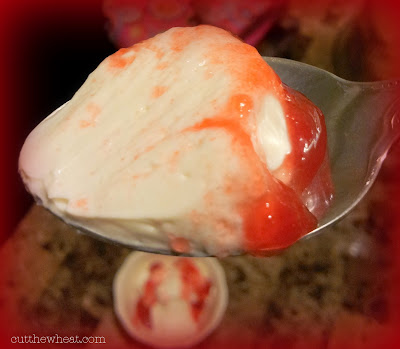 Fast & Delicious Creamy Strawberry Cheesecake Mousse
Ingredients:
Directions:
1. In a medium bowl, cream together the neufchatel or cream cheese, vanilla extract, almond extract and powdered sweetener with an electric mixer.
2. In a separate bowl, whip the cream until it’s thick.
3. Fold the whipped cream into the cream cheese mixture with a rubber spatula. If necessary, use the electric mixer to mix for an additional few seconds to get the mixture nice and smooth.
4. Scoop the mixture into a small covered container and refrigerate for at least an hour.
5. When ready to serve, mix the preserves with water until smooth and then spoon over the portions of cheesecake mousse just before serving.
Makes two servings.
Nutrition (1/2 of recipe): 245 calories, 5 g carbs, 1 g fiber (4 g net carbs), 23 g fat, 6 g protein