Super ultra crazy fast post tonight, Wheaties, but I just had to share this complete success of a cheesecake! It is so super easy and the filling doesn’t require baking at all. The cheesecake filling is ultra creamy and great for company or any day at all.

I can’t take complete credit for this. I’m pretty sure Knox Gelatine coined the recipe, but I’ve seen variations of it all over the place. 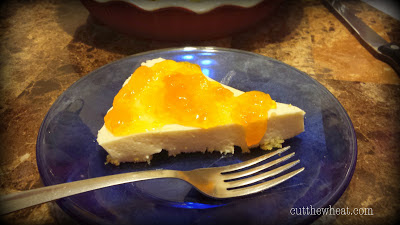 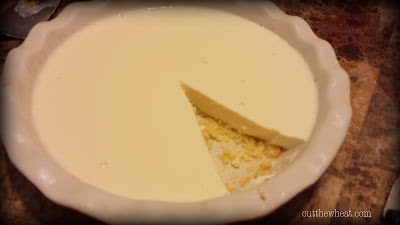 First, sorry for the awful pictures. This wasn’t a planned post! 🙂 As you can see, I spooned some sugar free peach preserves on top of my slice. My daughter tried sugar free strawberry and my husband preferred it plain. He proclaimed, “This cheesecake is husband approved!” While he said this with a smile on his face, his face in this photo was more usual of his photo-taking face. 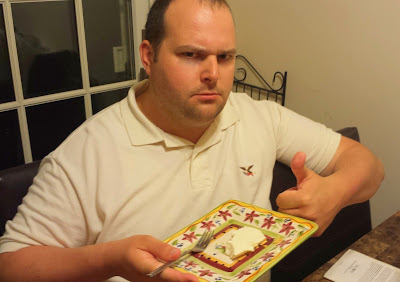 A quick note about the crust: make sure you bake it until it’s a deep golden brown and grease the sides of the dish where the crust won’t reach and the cheesecake filling will have direct contact with the dish. I didn’t do this (my crust was golden, but not golden enough), and I had trouble getting it to stay in place under the cheesecake, so it fell apart during slicing. Basically, make sure it’s baked into a crust and isn’t cake-like at all (my mistake) and grease, grease, grease.
Creamy No-Bake Cheesecake
Ingredients:
Crust:
Filling:
Directions:
1. Preheat oven to 350 degrees to bake the crust.
2. In a medium bowl, combine almond meal, cinnamon, Swerve and melted butter. Press the mixture into a pie or large tart pan until it’s evenly covered.
3. Bake the crust on the middle rack for about 20 minutes or until it’s golden brown. Set aside.
4. Prepare the filling by first beating the cream cheese and vanilla extract on high speed until it’s light and smooth. Scrape the sides of the bowl to make sure you get all of the cream cheese beaten properly.
5. In a large measuring cup, combine the boiling water, gelatin and Swerve and mix with a wire whisk for several minutes until the Swerve and gelatin are completely dissolved.
6. Pour the water mixture very slowly into the cream cheese mixture while beating it until all of the water is incorporated. The mixture will be very thin. Be sure to scrape the sides of the bowl. Beat just until all of the mixture is smooth and pourable.
7. Pour the cheesecake mixture into a bowl and cover it loosely with foil or plastic wrap. Allow it to set up in the refrigerator for about 45 minutes.
7. Grease the pie pan wherever your crust didn’t reach to prevent the cheesecake mixture from sticking.
8. Pour the partially set-up cheesecake mixture into the pan atop the crust. Place the cheesecake into the refrigerator lying completely fat. Cover loosely with foil or plastic wrap if desired.
9. Allow the cheesecake to set up for 3 hours or overnight in the refrigerator. Slice and serve. Top with sugar free preserves, sugar free chocolate chips or fresh cut fruit if desired.
Makes 8 servings.
NUTRITION (1/8TH CAKE):
Made with traditional cream cheese): 330 calories, 5 g carbs, 2 g fiber (3 g net carbs), 29 g fat, 10 g protein
Made with neufchatel cheese): 270 calories, 7 g carbs, 2 g fiber (5 g net carbs), 23 g fat, 10 g protein