Some of you already know this about me, but before I stopped eating wheat, I used to be a cupcake fiend. I ran a side business baking event cupcakes for weddings, showers, birthdays and charity events. It’s sufficient to say that cupcakes were my life. (lol) 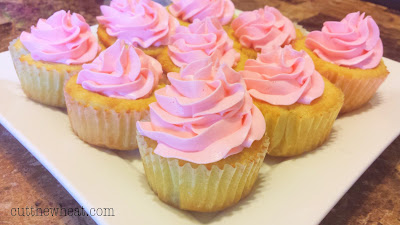 Finding the perfect grain-free, sugar-free cupcake recipe hasn’t been easy, but I think I’ve finally perfected it. These moist vanilla cupcakes complete with real buttercream are as close to the “real” deal as you’ll get. They look amazing and taste amazing too. As with my muffin recipes, arrowroot starch is part of the secret. It’s not inherently low carb, but it’s much lower in carbs than flour and you only use a tiny bit of it to keep the taste and texture authentic. These cupcakes have only 6g of net carbs apiece (and that’s including the carbs found in Ideal, which is the sweetener I used), so they’re a great way to indulge your sweet tooth on a family member’s birthday without undoing all your hard work. 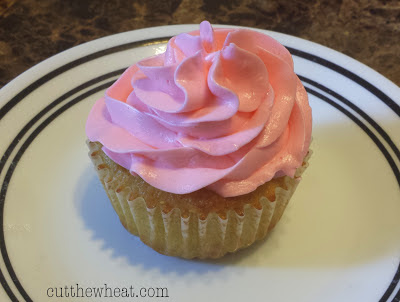 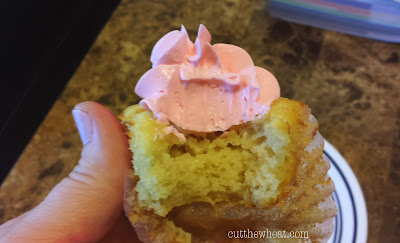 I chose to add pink food coloring to the frosting, but you can choose if you want to add coloring when you bake these up. Also, it is imperative that you use a light granulated sweetener such as Ideal or Stevia in the Raw– because it is highly dissolvable. Splenda would also work here, if you use Splenda. Using a pure granulated form of erythritol or xylitol will result in a grainy texture in the frosting.

If you’re looking for healthier sprinkles, these ones from Let’s Do are organic and all natural. They’re not sugar free, but a few will add a nice touch without processed sugars or artificial colors.


Frosting:
Directions:
*****You will beat the mixture on high speed for 10-15 minutes before the frosting will begin to come together. Don’t worry if it’s taking a long time– it WILL eventually come together– I promise. Also, you may wish to drape your mixer with a clean towel during this process as the liquid will splatter all over and make a mess.*****
Makes about 10 cupcakes.
NUTRITION (1/10TH OF RECIPE): 235 calories, 7 g carbs, 1 g fiber (6 g net carbs), 22 g fat, 4 g protein