When I first started this recipe, it was nothing but an idea. When I finished it, I actually considered calling it “Smack Your Mama as Hard as You Can” soup. Seriously. It’s that good. 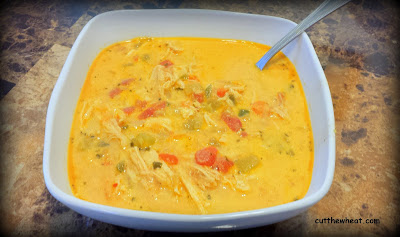 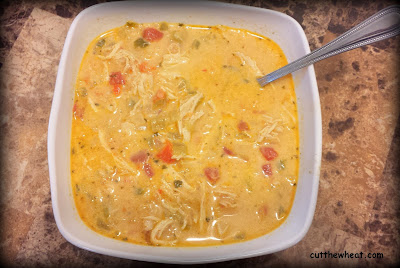 I was inspired by a soup I had at a Zoup! restaurant. In case you’ve never been, Zoup! is a soup-salad-sandwich casual fast food concept. They offer tons of soups, including things like lobster bisque and macaroni and cheese soup. My inspiration, however, came from Zoup’s “Zesty Three Pepper Chicken” soup. It’s smoky, spicy and creamy, and it’s actually pretty low in carbs (but not gluten free). With one taste, I knew I had to give it a try in my own kitchen.

Zoup’s version doesn’t contain beans or corn, which is nice. However, if you like black beans and sweet corn kernels and you can handle the carbs from them, they’d complement this soup wonderfully.

Once you’ve got all of your ingredients chopped and shredded, this soup is done in less than an hour. The whole family will go gaga over it. You can control how spicy you like it, too. This recipe is for a nice medium heat. You can also double up the batch and freeze this. It’s perfect for warming your bones. It’s just sooooo good. Also, there are more than four types of pepper in this soup. However, there are four “main” types, so I named it four. I guess it could have technically been called “six pepper” soup. What to you think?


Directions:
1. In a large pot, lightly sauté butter, onions, jalapeño and red bell pepper for about three minutes over high heat.
2. Add in chicken broth, tomatoes in juice and green chilies. Stir lightly, then add in sour cream and heavy cream. Reduce heat to low-medium.
3. Whisk the mixture until the sour cream is completely melted and smooth throughout.
4. Add in the cayenne, cumin, red pepper flakes, garlic powder, chili powder, paprika, oregano, black pepper and salt. Stir well. Let this mixture come to a simmer.
5. Once simmering, add in the shredded chicken. Stir well.
6. Allow mixture to simmer on low heat for another 20-30 minutes to thicken. If it becomes too thick, add in water by the tablespoon to slightly thin it out.
7. Top with chopped cilantro for garnish, if you wish.
Makes 8 servings.
NUTRITION (1/8th Recipe): 200 calories, 6.5 g carbs, 1 g fiber (5.5 g net carbs), 13 g fat, 14 g protein