This isn’t a recipe, per say. I mean, for the inside of a cake pop, you pretty much just smash up some cake and some frosting and form it into little balls, and then cover it in melted chocolate. That’s exactly what I did. 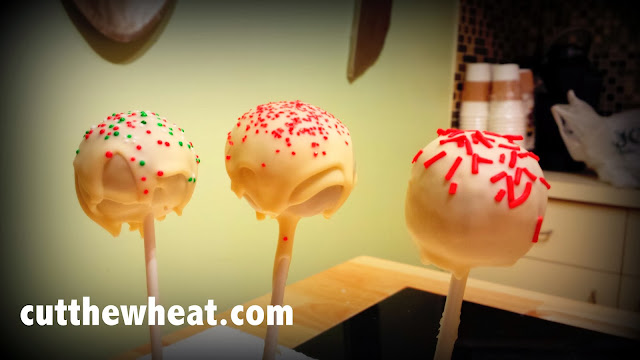 You can make a cake pop from pretty much any cake– not just this red velvet one. Also, I only used a little bit of white chocolate (in fact, I only made three little pops– so I didn’t want to waste the chocolate. That’s why mine look lumpy). If you’re making a bigger batch, you should be able to get a smoother result with the chocolate, as you won’t have to spoon it over the pops like I did. 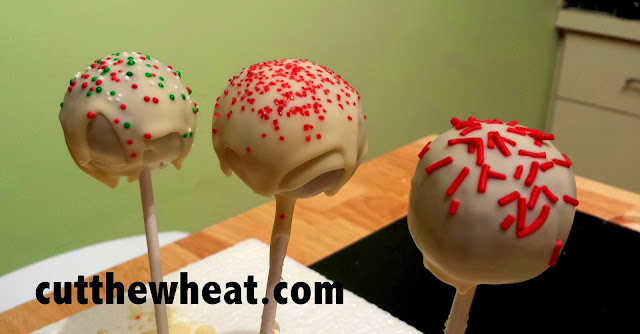 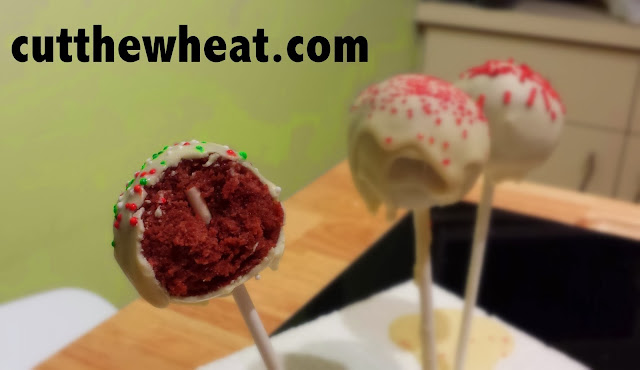 Take the frosted red velvet cake from this recipe and crush it in a large bowl (including the frosting) until you get a mass of “dough.” You can do a whole cake, half a cake, or just a slice– it’s up to you and how many pops you want. One normal slice of the cake should yield about three pops (for reference).

Roll the “dough” into 1-inch balls and freeze them for 1-3 hours until they’re nice and hard. Once they’re frozen, melt sugar free white (or milk, or dark– whatever you prefer) chocolate (I used this kind) in the microwave in 10 second intervals (or according to package directions) or melt over a double boiler. Melt in half a teaspoon of non-hydrogenated palm shortening or coconut oil per 4 oz. of chocolate used (this will make the results smoother).

Dip the tips of sucker stick into the melted chocolate, then insert into the cake balls. Allow to try for two minutes, then dip the cake balls into the melted chocolate. You may want to do two dips per pop as sugar free chocolate gets a bit thinner than sugar-containing chocolates. Top pops with sprinkles, if desired, white still wet, to get sprinkles to stick. Dry completely in the refrigerator (or for several hours at room temperature.