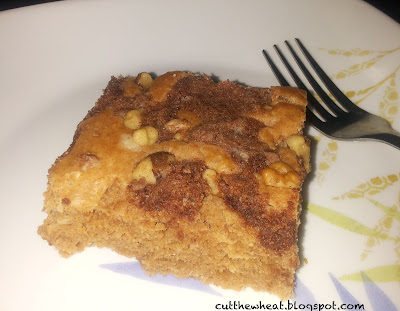 Super quick post tonight, but I was playing around in the kitchen earlier and had a bad craving for something cinnamon. Before I knew it I was talking to myself and playing science experiment. By the taste and looks of it, I’d say this experiment was a success! My husband said I should call this “Low Carb Drake’s Coffee Cake.” We’re Seinfeld lovers, so he kept asking me, “What? Don’t you like Drake’s Coffee Cake? Everybody likes Drake’s Coffee Cake!”

Anyway, the cake was as perfect as I’ve ever gotten in a first try. As it cooled it became sturdy but didn’t lose its moisture, making it absolutely ideal for cutting into squares and freezing for future individual servings (which is exactly what I did)!

And now the recipe for this delicious piece of breakfast or any-time-of-the-day heaven: