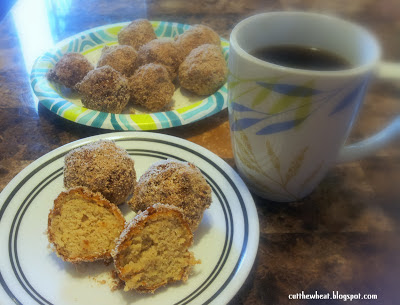 One thing you really kind of miss indulging in on a reduced carbohydrate, no sugar, wheat free and gluten free diet is the donut. There is a Krispy Kreme up the street from my house. For those of you who don’t know, Krispy Kreme retail locations make the donuts in-house. You can literally walk in and watch the sugary syrup being poured over the donuts as they make their ways down the belt and into the hands of employees who box them up. While this is happening, a large light is displayed in the window that says, “Hot Donuts Now!” We learned about two years ago that whenever this sign is on, you can stop in and ask for a free hot glazed donut with no questions asked. My husband and daughter make a point of stopping most of the time we pass by the shop and the light is on. I normally stay in the car if I’m there.

OK, these donut holes aren’t yeast raised. They’re not the same as a glazed yeast donut, but they’re still divine. These are similar to the usual cake donut– the kind you get sprinkled with powdered sugar or cinnamon topping. Seriously. These are INSANELY good. Try dunking them in your cup of coffee and it’s pretty much the same as the “real” thing.

A key ingredient in this recipe is nutmeg. If you’ve never made homemade donuts before, you might think I’m crazy– but donut shops use nutmeg in their cake donut recipes. It makes these delicious little balls of fun taste very authentic– almost like the real thing.

I recommend frying these in coconut oil, as other oils don’t hold up well to high heat. I mean seriously, are you really still consuming canola, vegetable or soybean oils anyway? If you are, you should probably stop. Unless you like bodily inflammation. 😉 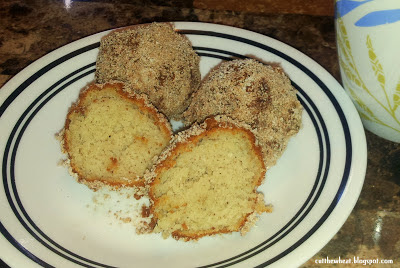 I used a 1/2 ounce cookie scoop to get my dough into the oil. A spoon will do the trick if you don’t have a cookie scoop. The donuts will double in size in the oil, so keep that in mind while you’re making these. Also keep in mind the fact that coconut oil is very expensive, so you’ll probably only want to use a very small pan and make them three or four at a time. These leave a lot of debris in the oil, so it’s hard to reuse. I used that teeny tiny sauce pan we all have in the back of the pan cupboard–the one that only holds about four cups of water. It’s perfect for this. 🙂 Enjoy!
Low Carb, Wheat, Gluten and Sugar Free Donut Holes
Ingredients:
Directions:
Makes about 15 donut holes. Nutrition facts estimate 5 tablespoons of retained coconut oil from frying in the entire recipe.
Nutrition (per 2 donut holes): 150 calories, 2g net carbs, 3 g fiber, (5 total carbs), 14 g fat, 6 g protein